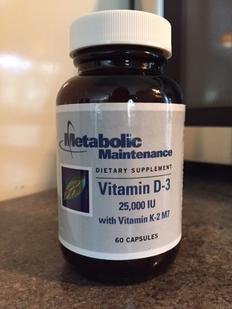 Vitamin D functions as a hormone in our bodies and has two forms. Vitamin D 2 and D 3. Vitamin D 2 is found in fungi, plants, and supplements. It is Vitamin D 3 that is formed in our skin when it is exposed to UVB light. It is also found in animals, oily fish in particular, supplements and fortified foods.  When the D 3 is formed in the skin, the liver and kidneys have to produce the active metabolites. Therefore, liver and kidney disease are risk factors for D deficiency as is obesity, sunscreen use, and living in latitudes above L.A. and Atlanta.

What does it do?

Vitamin D receptors are found throughout the human body. It is important in regulating calcium and phosphorous in the blood, maintaining bone growth and remodeling, which prevents rickets in children and osteoporosis as we age. Vitamin D is an important immune system modulator. It can suppress an overactive immune system in the case of inflammatory autoimmune diseases like arthritis, lupus, and multiple sclerosis. It can activate the immune system to fight cancer and infections like tuberculosis, flu, and pneumonia. It also regulates insulin use and release fighting diabetes, as well as reducing cardiovascular risks including stroke and heart attack.

Studies in the 80’s revealed that Americans are vitamin D deficient. In fact, in one study, 80% of the subjects tested in San Diego, CA had blood levels below 20ng/ml.  It was previously believed that only those in the northern latitudes of the US were deficient. It was also believed that vitamin fortified milk would protect us all.

In 2007 Dr. Russell Blaylock wrote about low vitamin D levels being linked with Multiple Sclerosis and certain cancers including colon, breast and prostate. Since then, many more studies have made the same conclusion. He also stated that studies showed that Vitamin D-3 was the key to lowering these diseases, not the form most used to fortify milk, bread and cereal. In addition, the RDA of 400mg/day was far too low to obtain the necessary blood level of 50-70ng/ml. He recommends 5,000iu of D-3 per day to achieve optimal levels.

In the 70’s and 80’s dermatologists started campaigning for reduction of sun exposure to reduce malignant melanomas. They included the use of sunscreen from head to toe, use of wide brimmed hats and long sleeves. The campaign was great for sunscreen manufacturers but malignant melanoma cases have continued to rise. This advice increased vitamin D deficiency, the resulting inflammation, malignant melanoma incidences, and other cancers. Am I advocating not using sunscreen? NO! Sun damage ages the skin and increases the incidence of skin cancer. I AM advocating smart sun exposure without sunscreen. Generally, 20 min/day at midday is adequate to produce 50,000ng/ml of vitamin D. The problem is that it all depends on your physical location (latitude), the color of your skin, the time of day and year, amount of skin exposed, as well as ozone levels. In the US, those above Atlanta’s latitude cannot get adequate UVB rays between November and March no matter what the ozone conditions, time of day, etc. Whew. If that is too much math for you, just take a supplement, at least in the winter months.

The hubbub about vitamin D has produced a huge demand and an even bigger supply of choices of supplements. You will hear me say over and over, buy a professional brand. I trust Metabolic Maintenance Vitamin D3, 5,000iu once a day or 25,000iu +k2 two or three times a week. Get them at naturalhealthyconcepts.com for the best price and customer service.

If you have been tested and are below 20ng/ml it will take a few months to get your levels up so be patient and diligently take the higher doses of D. Patients have reported feeling better within days citing less depression, more energy and reduced joint pain.