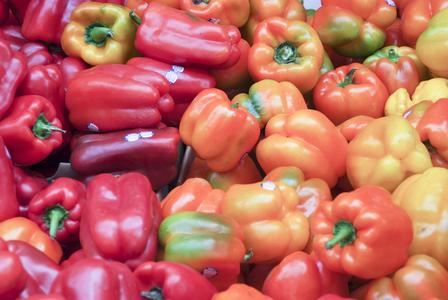 Tis the season for sweet bell peppers and fresh peppers of all kinds. I’ve already harvested several from my little square foot garden. They add a lot of flavor for such a small little vegetable.

I prefer mild peppers on a daily basis but add a jalapeno to some recipes. Some people get an endorphin rush from the seriously hot ones. There is a scale to measure the heat of peppers. It is called the Scoville Scale. The heat scale goes from the bell pepper, which is 0 to the current hottest known pepper, the Carolina Reaper, which is 1,570,000. By the way, The Carolina Reaper was developed by Ed “Smokin” Currie who runs the PuckerButt Pepper Company in my home state of South Carolina. I couldn’t be prouder!

I learned this year from several different sources that green bell peppers are more offensive to people than the yellow, red, or orange varieties. Evidently, they cause the most indigestion. That’s easy enough. Just eat the other colors instead.

Red bell peppers have 157% DV of Vitamin C! That’s a one-cup serving so eat up! They also provide B vitamins, fiber and minerals, all for only 30 calories.

Beyond vitamins and minerals, peppers have an impressive assortment of phytonutrients. They contain the carotenoids alpha and beta-carotene, lutein and zeaxanthin, important for neutralizing free radicals and preventing DNA mutation therefore cancer. Lutein and zeaxanthin are also noted for prevention of eye disease and maintaining vision.

The flavonoid quercetin is also prevalent in peppers and has been touted here before. Lifeextension.com sites studies where quercetin supplements have had benefits in improving cardiovascular disease, cancer, and allergy and asthma. All the benefits of quercetin are still not fully known.

The variety of peppers and their heat ratings are huge. I stick to the sweet and low heat varieties. I buy the little red, orange and yellow mini peppers every week and enjoy slicing them into my Seven-day Salad. I also buy whatever is at my farmer’s market and dice them, spread on a sheet pan, freeze, then place in zip-top bags for use in fall and winter soups and stews. My vegetable trays always have as many colors of peppers I can buy. They are always in my fridge ready to be dragged through some hummus for a quick snack.

In an article at GreenMedinfo.org entitled “The Link Between Nightshades Chronic Pain and Inflammation”, I read that the solanaceae family of vegetables, (also called nightshade), contain cholinesterase inhibiting glycoalkaloids and steroid alkaloids. When cholinesterase is inhibited acetylcholine accumulates and results in inflammation and other deleterious effects.  The article quoted Dr. Marvin Childers:

The article recommended a three-month elimination of all vegetables in the solanaceae family to determine if you are sensitive to these compounds.

In the absence of any form of arthritis or severe inflammatory disease, eat up!

I have no idea where this recipe came from. Sorry to person who invented it!

1 c. rice, (white, brown or wild will all work; I prefer short grain for this recipe)

1 can any type of beans (optional)

Cook the rice in the vegetable stock, according to the instructions on the package.

Meanwhile, toast the pine nuts in a small skillet over medium to low heat, being careful not to burn. Set pine nuts aside.

Cut the tops off the bell peppers, remove and discard the seeds and innards. When the rice is almost done, preheat the oven to 375 and begin preparing the filling.

In a large saucepan heat the butter or olive oil, then add the garlic and onion and sauté gently for several minutes.

Add the spinach and mushrooms and cook a few minutes more, just long enough to wilt the spinach. Stir in the now finished rice, toasted pine nuts and optional beans (for more bulk and added protein) and remove.

Assemble the peppers by adding one to two tablespoons of the shredded cheese into the bottom of the pepper, then partially filling with the rice mixture, then layering more rice on top. Repeat until full and slightly overflowing with the rice.

Once youʼve filled all four peppers, place into a shallow dish and bake, covered, for about thirty-five minutes. Uncover, sprinkle the tops of the peppers with a bit more cheese, and cook for five minutes more. Remove, allow time to cool, and enjoy!

3 tablespoons EVOO, plus extra for drizzling

1 small firm eggplant, trimmed of half the skin, chopped

1 fresh chile pepper, such as Fresno, thinly sliced, or 1 teaspoon

Preheat the oven to 450 degrees F.

Bring the quinoa and stock to a boil. Cover and simmer until the liquid is absorbed and the grain looks translucent, 12 to 15 minutes.
Then fluff with a fork. You will have about 4 cups of cooked grain.

Drizzle the bell pepper halves with EVOO and season both sides with salt and pepper. Roast cut-side down until the skins begin to char
and the peppers are just tender, about 20 minutes. Remove from the oven and cool to room temp, then arrange in a baking dish cut-side
up.

Meanwhile, heat 3 tablespoons EVOO, 3 turns of the pan, over medium-high heat. Add the garlic, eggplant, zucchini, onions and
chiles, and season with salt and pepper. Cook partially covered to tender, 10 to 12 minutes. Add the herbs and tomatoes, and combine
with the quinoa.

Fill the pepper halves with the quinoa and vegetable stuffing and drizzle with EVOO. Cool and chill for a make-ahead meal.

To serve, roast in a 375 degree F oven until the peppers are hot through. Serve the pepper halves topped with Daiya mozzarella.