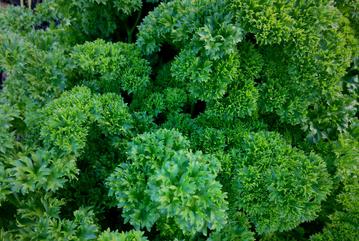 Named after Elvis, right? DON’T HIT DELETE! It gets better, I promise.

My whole life I thought this was an inedible decoration for the edge of the plate at fancy restaurants. (Think “pork” in canned “pork and beans”.) I swear to this day, my mother has never purchased a bunch of parsley nor ever had any in her home. It was 2009 when I realized this is actually a vegetable with significant health benefits and flavor.

In 2009 I started juicing and read on juicing websites about the health benefits of parsley juice. Just a sprig or two added to fresh vegetable juice boosts the juice’s nutrition and gives it a fresh, bright flavor.

Super Food For Sure

One of my favorite websites, whfoods.org says,

“Parsley's volatile oils—particularly myristicin—have been shown to inhibit tumor formation in animal studies, and particularly, tumor formation in the lungs. Myristicin has also been shown to activate the enzyme glutathione-S-transferase, which helps attach the molecule glutathione to oxidized molecules that would otherwise do damage in the body. The activity of parsley's volatile oils qualifies it as a "chemoprotective" food, and in particular, a food that can help neutralize particular types of carcinogens (like the benzopyrenes that are part of cigarette smoke and charcoal grill smoke).”

It’s a mouthful, but, glutathione-s-transferase is what makes parsley a great detoxifier and celater. It will assist the body in grabbing hold of toxins and free radicals and sweep them out of the body.

Vitamin C is found in every vegetable but the problem is that it is de-natured at high temperatures and is almost non-existent once our food hits our plates. The great thing about parsley is that it is eaten raw and retains all it’s vitamin C. Vitamin C is a powerful anti-oxidant and anti-inflammatory agent. People with the highest levels of vitamin C are at a reduced risk of cancer, heart disease, stroke, diabetes, and almost every know disease. It’s anti-inflammatory properties relieve arthritis and other inflammatory conditions. It is well known that Vitamin C helps strengthen the immune system and can protect against colds and viruses.

Parsley is easy to grow and is usually available in pots in the produce section of the grocery store. But if you don’t want to grow your own just pick up a bunch. It comes in flat leaf and curly leaf varieties. I prefer the curly because it holds up well in recipes and stays green longer than the flat leaf.

I make a yummy salad with parsley called tabouli. It is a Middle Eastern dish with lemon, mint, garlic and olive oil. The recipe takes one bunch of parsley stems and all. It is a refreshing summer treat. I’ll put the recipe below.

Before removing the rubber band securing the stems, use a chef’s knife to trim about 1 ½ inches off the ends of the stems. Rinse well and spin your bunch of parsley dry. To chop it, you can squeeze the curly tops into your palm to get them under control then feed them under the blade of your chef’s knife. You can also use a food processor. You will retain more skin on the ends of your fingers that way. :-O

If you make vegetable juices, be sure to add a couple of sprigs of parsley to every batch. I love the combination of lemon and parsley in my carrot juice. It also brightens up beet juice. Talk about healthy! OMG!

Boost the nutritional power of smoothies with a few sprigs of parsley. Next to sprouts, it is the healthiest green you can add. The taste will disappear behind bananas and strawberries or blueberries.


Carefully mince the parsley and mint using a large cutting board and large chef’s knife. Add them to a large bowl. Add the remaining ingredients and mix well. Enjoy!