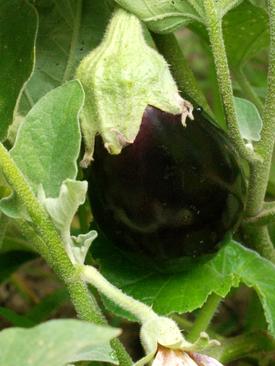 
The French call them aubergine. These beautiful vegetables are available in abundance in summer

and are worth a second look if you have never prepared them. There are two delicious recipes at the

bottom but here’s WHY you should include these in your diet.

One cup of eggplant cubes is only 20 calories. They, of course, have no cholesterol and less than one

gram of fat. They DO have almost a gram of protein, 2.5g of fiber, 5% DV of potassium (or as Rodney’s

whfoods.org. Turns out, eggplant is full of chlorogenic acid which is one of the most potent free radical scavengers (aka, anti-oxidant) found in plant tissues. Benefits attributed to chlorogenic acid include anti-mutagenic (anti-cancer), antimicrobial, and anti-LDL (bad cholesterol) activities.

Eggplant also contains a flavanoid called nasunin which not only acts as a free radical scavenger (anti-oxidant) but also chelates iron. Chelators, as you may recall from my Parsley letter, grab hold of toxins and sweep them out of the body. Excess iron in the body promotes oxidation therefore increasing homocysteine and speeding up the aging process.

Many recipes calling for eggplant ask that you salt them and let them sit and sweat for a while before cooking to remove the bitterness. I don’t usually do it because I have never had a problem with bitterness. Maybe because these are the only two ways I cook it and the recipe removes it by itself? Dunno. Also, I know the skin has super nutritious value but I take it off cause it is tough. If you can eat it good for you!

This is only the tip of the iceburg when it comes to the nutritional value of eggplant. There is a reason God invented eggplant and we should all have a little in our diets. Hope you enjoy these ways to eat it as much as I do!

Meanwhile, in a large pot, place chopped onion and garlic with a small amount of water and simmer until tender. Add zucchini and spices and cook a few minutes to start the zucchini cooking. Add eggplant, tomatoes, and chickpeas, cover and simmer until tender. Add raisins a few minutes before done. Add extra vegetable broth if you want more “pot liquor”.

Cover a large sheet pan (or two) with parchment paper.

Place corn meal and seasoning in a separate flat bottom container and blend them together.

Dip eggplant squares in milk then in corn meal and repeat.

Bake for 30-45 min (until crispy and brown) turning halfway through.

Place a layer of baked eggplant rounds on top of the marinara.

Cover them with marinara and repeat until all the rounds are used.

Bake uncovered for 30 minutes in the 400-degree oven.